A major way that the Society meets its goal of facilitating the exchange of information concerning the science and technology of energetic materials is through the sanctioning of seminars and workshops. Organizations seeking to host IPS-sanctioned events are invited to submit proposals as specified by the Society’s Constitution and Bylaws.

The International Pyrotechnics Society Seminars continue to be unique and valued events for those engaged in the science, technology, and management of energetic materials. Today, the seminars are unparalleled in the extent of the topics that are covered, which include all aspects of pyrotechnics, explosives, and propellants. The seminars provide attendees the opportunity to meet with a diverse group of specialists from around the world. Traditionally, time has also been included for social activities. This strengthens the cohesiveness of the energetic materials community and has led to long-lasting collaborations, working relationships, and friendships between participants.

The first seminar took place in Estes Park, Colorado during the summer of 1968. It was organized by Robert (Bob) M. Blunt of the Denver Research Institute (DRI). In the preface of the proceedings, this gathering was referred to as the “First Military Pyrotechnics Seminar.” Although it was hosted by DRI, it was also enthusiastically supported by the Concepts Development Division, Research and Development Department, U.S. Naval Ammunition Depot in Crane, Indiana (which is now called NSWC Crane). Dr. Bernard E. Douda, then just 16 years into his 60 year career at Crane, was instrumental in promoting the seminar. 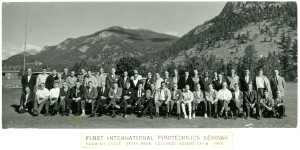 The photo key identifies the participants. High resolution versions of this photograph and the key are available in the Members Only area. 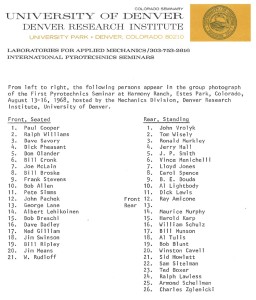 Given the success of this first seminar, additional ones were organized throughout the 1970s.
In 1976, Bob Blunt explained the origin of the seminars and those responsible for the initial idea:

“This seminar is the child—or perhaps the grandchild—of an idea that was discussed at length in 1967 by Jim Kottenstette, Ralph Williams, Bill Cronk, Bernie Douda and me. The idea as it was debated among us was concerned with the need for formal course work to provide an educational grounding in Ordnance Science and Engineering similar to the existing courses in other engineering fields of specialization. Unfortunately, this idea never came to be a reality, but it did form the kernel around which the first Seminar in Estes Park was built, with great help and encouragement from Bill Cronk and Bernie Douda.”

Bob Blunt, Chairman of the 5th IPS Seminar,
An excerpt from the preface of the proceedings.

In the early 1980s it was decided to increase the frequency of the seminars by holding some outside of the United States. The Society initially achieved this by sanctioning the events of other organizations. The first combined event took place in 1985 when the 10th IPS Seminar was held in conjunction with the 16th International Annual Conference of the Fraunhofer ICT in Karlsruhe, Germany. Since then, IPS has sanctioned numerous seminars in countries other than the U.S. These include France (6 times), Germany (2 times), China (2 times), and one seminar in each of the following countries: Spain, Netherlands, Australia, Japan, Russia, New Zealand, Sweden, and the United Kingdom. In France, the International GTPS Seminar has occurred in conjunction; since 1999 the combined events have been referred to as the “EuroPyro” series.

The seminars held in the U.S. have occurred in even years and those held elsewhere have often occurred in odd years. The U.S. seminars have almost exclusively occurred in Colorado, with only one exception—the 24th in Monterey, California.

The origins of the International Pyrotechnics Society as we know it today are intertwined with events that occurred at the early U.S. seminars. The U.S. seminars were chaired by Bob Blunt and hosted by DRI from 1968-1978. These responsibilities were transferred to Dr. Allen J. Tulis of IIT Research Institute (Chicago, Illinois) before the 7th seminar in 1980. The 1980 seminar was also distinguished by the formation of a formalized steering committee, which included five members: Tulis, Blunt, Dr. David H. Anderson (Sandia National Laboratories), Dr. David R. Dillehay (Thiokol), and Dr. Bernard E. Douda (NSWC, Crane). These five had also founded the International Pyrotechnics Society shortly before, and were the Society’s first officers and the initial members of the board of directors.

The composition of the steering committee and that of the IPS board of directors gradually diverged. Blunt remained the steering committee’s chairman emeritus until his death in 1995 and subsequently the 22nd IPS Seminar was dedicated to him. The steering committee was incorporated in 1999 and later renamed IPSUSA Seminars, Inc., which continues to host the U.S. seminars to this day. The year 2000 brought change with Dr. James E. Kennedy (Los Alamos National Laboratory) chairing the 27th seminar. Dr. Bernard E. Douda subsequently served as a co-chair of the U.S. seminars until his retirement. Dr. David R. Dillehay, one of the founding officers of IPS and a long-serving member of the IPSUSA Seminars, Inc. board of directors, passed away shortly before the 42nd IPS Seminar, which was dedicated to him.

In recent years, the co-chairs of the U.S. seminars have changed on a regular basis and this practice ensures that the series will maintain the dynamism it has become known for. Today, the International Pyrotechnics Society and IPSUSA Seminars, Inc. are distinct entities. Even though there have been many changes over the years, the main objective has remained essentially the same. Both organizations are committed to sanctioning and hosting successful IPS Seminars for many years to come.

Every IPS Seminar has been accompanied by a book of proceedings, which contain a wealth of information of interest to the energetic materials community.

Additionally, since 2004, the Workshop on Pyrotechnic Combustion Mechanisms has occassionally occurred as a separate event in conjunction with IPS Seminars. This one day workshop has featured extended presentations by invited specialists.